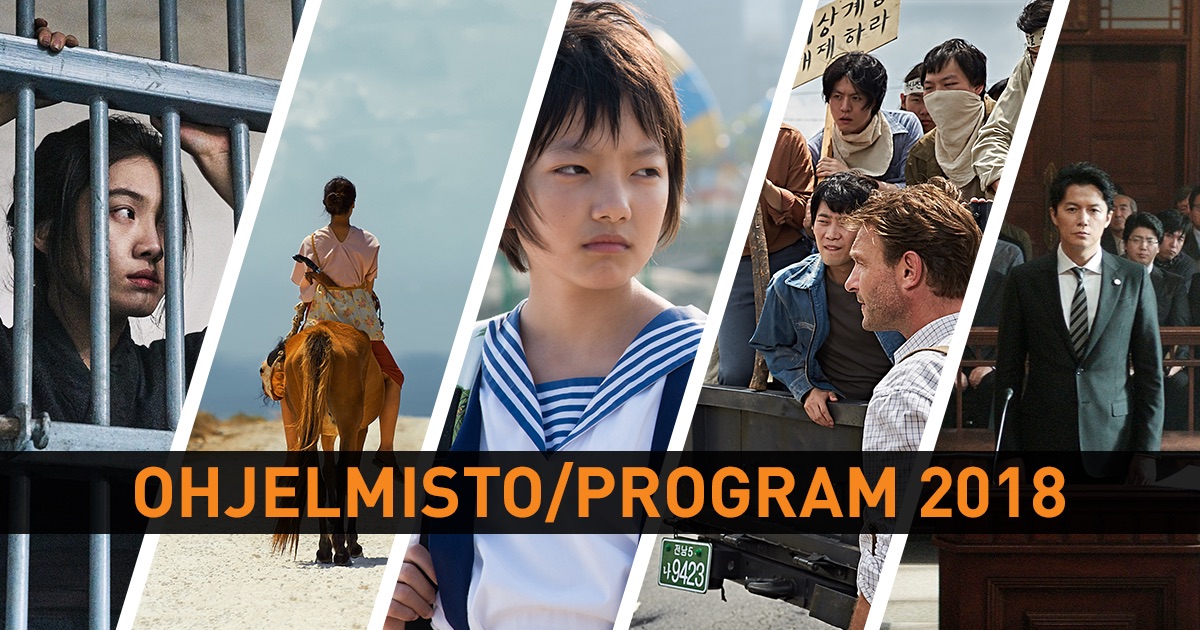 Director Kamila Andini will also be visiting Helsinki Cine Aasia and attend the screenings of her film and participate in a discussion about films and film making with Ulla Heikkilä (Women in Film and Television Finland).

From magical realism to everyday realism

In addition to the opening film there are magical elements in several of this year’s films: in Japanese cult director Nobuhiko Obayashi’s (best known for his film House, ハウス, 1977) avantgarde wartime film Hanagatami (花筐, 2017) and in Shin Su-won’s Glass Garden (유리정원, 2017) a peculiar romance in the magical realism genre that was also the opening film at Busan International Film Festival 2017.

A prominent theme in this year’s programme, especially in the festival’s Chinese films, is everyday realism and finding one’s place in society. Director Vivian Qu’s (producer of Black Coal Thin Ice, 白日焰火, 2014) latest film Angels Wear White (嘉年华, 2017) discusses the difficult topic of sexual abuse and the hierarchy of privileges where those on the bottom of society are the ones with the fewest options in life. Li Ruiju’s Walking Past the Future (路过未来, 2017) depicts the life of China’s internal migrants who face whole new realities when their jobs are taken from China to even cheaper countries.

In Dark Is the Night (Madilim ang Gabi, 2017), directed by Adolfo Alix Jr., realism comes painfully close when following the lives of the victims of Rodrigo Duterte’s drug war in the Philippines, a war that has already taken the lives of thousands of people. Duterte’s drug policy is also one of the topics of the festival discussion that will feature a representative of the Finnish-Philippine Society, researcher Pekka Borg, and Anu Tuukkanen from Amnesty International.

Helsinki Cine Aasia 2018 programme also features thrilling adventures of small time criminals and gruesome murders. Based on real events Somewhere Beyond the Mist (藍天白雲, 2017) reveals a side of Hong Kong one rarely sees. Directed by Cheung King-wai the film introduces a pregnant police officer who is sent to investigate a double homicide. In a surprising twist, the daughter of the murdered couple claims responsibility for the murder. Marlina the Murderer in Four Acts (Marlina Si Pembunuh Dalam Empat Babak, 2017) shows us Marlina, a revengeful widower tormented by a bunch of villains. Mouly Surya’s feminist western is linked to the topical #metoo theme that is seen in several other films in this year’s Helsinki Cine Aasia programme.

Hirokazu Kore-eda’s The Third Murder (三度めの殺人, 2017) follows an experienced lawyer Shigemori whose aim is to save his client from the death penalty by all means necessary. The only thing in his way seems to be the accused Mr. Misumi, who keeps on changing his story.

A more lighthearted example of the crime genre this year is Masaharu Take’s We Make Antiques! (嘘八百, 2018). The film takes place in the underworld of antiques where a group of greedy crooks do their utmost to cheat each other. At the heart of it all is the valued tradition of Japanese tea ceremony and one very special tea cup, that any collector would die for. The theme continues with Lee Joon-ik’s Anarchist from Colony (박열, 2017), a historical blockbuster with a whole lot of action, humour and romance.

Japanese director Shuichi Okita charmed Helsinki Cine Aasia audiences already in the early days of the festival with his film A Story of Yonosuke (横道世之介,  2013). This year the master of wholehearted comedy-drama provides us with The Mohican Comes Home (モヒカン故郷に帰る, 2017) where a young couple happily expecting their first child also have to deal with the pain of letting go of a family member. There will also be a parent and baby screening of The Mohican Comes Home on Friday the 16th of March.

Along with Shuichi Okita the festival audience has time and time again been mesmerized by  the Watanabe brothers. Their newest Party ‘Round the Globe (地球はお祭り騒ぎ, 2017) is loyal to the stripped down style and macabre humour that is the trademark of the brothers.